The Theatre Royal is the oldest theatre in Glasgow and the longest running in Scotland. Located at 282 Hope Street.  The venue is just 5 minutes away from The Charing Cross Hotel, making us the perfect place to stay for an evening at the theatre.
The Theatre Royal Glasgow presents a wide variety of drama, dance, comedy, opera, musical and children’s theatre!  The Victorian auditorium and stylish contemporary corporate areas provide privacy and flexibility for many occasions. On March 2005 Ambassador Theatre Group took over the management of the Theatre Royal Glasgow, and continues to present first class entertainment.
Some of the great performances coming to the theatre in the coming months are;
Swan Lake
The Classic retold for a new generation. Lose yourself in the raw intensity of this sleek and unmissable ballet, returning after selling out in 2006.
The Scandal at Mayerling
A true story of desire and destruction. Set in vienna 1889, the Royal Mayerling hunting lodge, Crown Prince Rudolph is found shot alongside his teenage mistress.
Nutcracker
Costumes plucked from the most gorgeous chocolate box, Tchaikovsky’s score to transport you to a land of dreams, and a story lifted straight from the pages of a classic fairy tale.
The theatre currently accommodates 1,541 people and is owned by Scottish Opera. Theatre Royal also became the home theatre of Scottish Ballet started in 1969, and became the main home of the Scottish Theatre Company during its existence in the 1980s. It became a principal venue of the city’s Mayfest Festival each year, and continues to attract visiting companies. Since 1977 it has been protected as a category A listed building of architectural and historic importance.
Although it is Scotland’s longest running theatre it is not an old fashioned building as in 1997 a lottery-funded refurbishment allowed for extensive rewiring and redecoration and also in 2012 Funding from the Scottish Government, Heritage Lottery and others enabled Scottish Opera to build new foyers at the corner of Hope Street and Cowcaddens.   Customers can now enjoy the theatre during the day as well, in a new café – Vanilla Black at the Theatre – serving coffee, cakes and other tasty treats. Complimentary wi-fi is available for cafe-users. 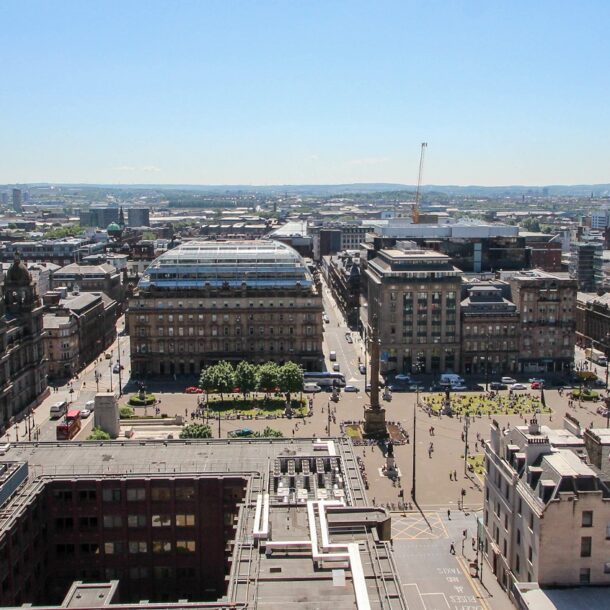